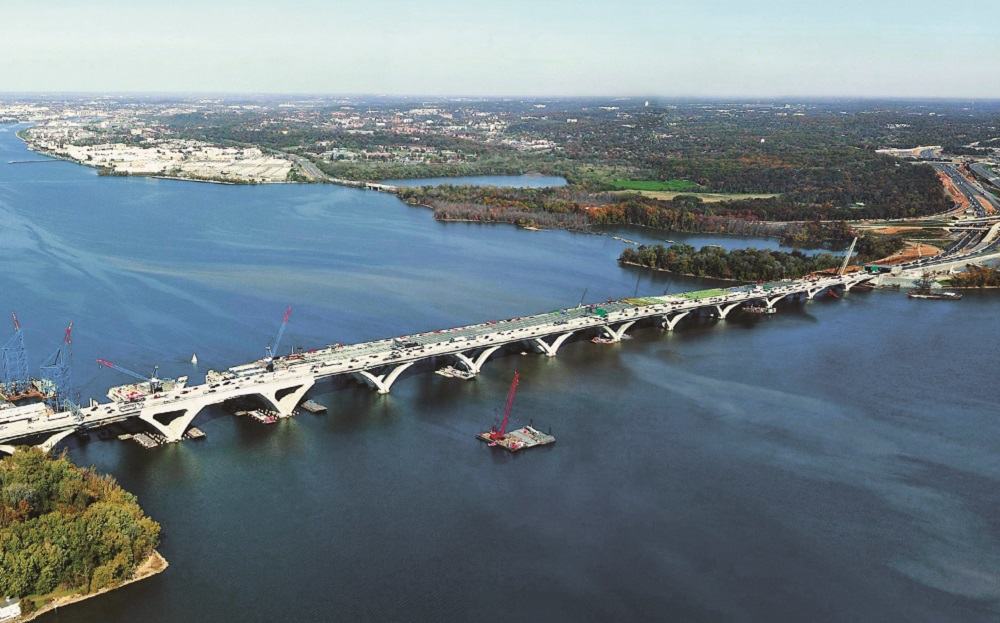 American Bridge participated as general contractor for the major river crossing component of the Woodrow Wilson Replacement Bridge near Washington, DC. The project involved twin, 22-span bridges totaling 3,881 feet including the main bascule navigational channel. The bridges were constructed in close proximity to an existing bridge, which carried 250,000 vehicles per day, and for which no service disruption was permitted. The right of way overlapped the existing bridge, requiring a phased replacement and numerous changes in traffic movements. The bridge was technically complex, encompassing large-scale cast in place segmental, precast segmental, and structural steel construction components. Concrete arch piers varied in plan and section at every elevation.

The Bascule Span contract was undertaken by an American Bridge-let joint venture with Kraemer and included an eight leaf trunnion bascule main span of 270 feet and flanking spans of 144.5 feet. The 12 lane bridge is founded on cast-in-place arch shaped piers, and post tensioned concrete segmental box sections. The superstructure is steel plate girders and floor beams with a cast-in-place 7.5 inch lightweight concrete deck. Each bascule girder is 204 feet long, 19 feet, 11 inches deep at the deepest point, and weighs about 450,000 pounds. The heaviest erection picks were up to 600 tons. The contract also included the fabrication and installation of all operating machinery, and construction of the operator’s house.

The Maryland Approach Contract was undertaken by Potomac River Constructors, LLC, a joint venture of American Bridge, Kraemer, and Trumbull Corporation. It included the construction of 19 spans of steel plate girder superstructure on precast segmental concrete arch piers. There are nine lines of four arch piers, a total of 36. The segments were cast in a purpose-built yard adjacent to the site. The segments vary in size due to an expanding cross section as the piers rise. This structure has a total length of 3,322 feet, a concrete quantity of 36,000CY, and a weight of structural steel of 24,000 tons.

In 2008, the Bascule Span received the OPAL Outstanding Project Award from the American Society of Civil Engineers.