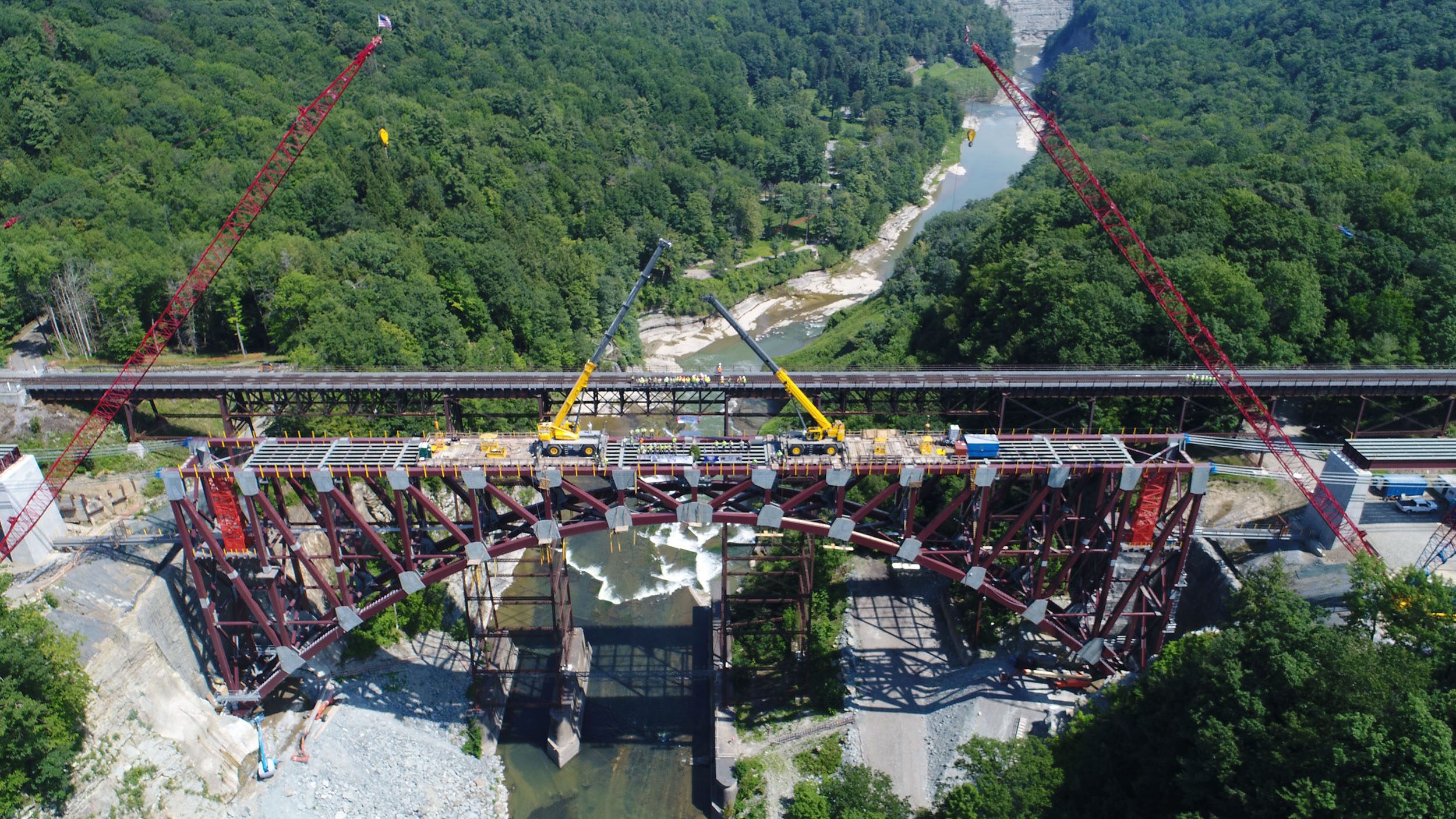 The Portageville Bridge is a vital link along Norfolk Southern’s Southern Tier Line that crosses the scenic Genesee River Gorge, in Letchworth State Park in Portageville, New York.  The first Portageville Bridge was constructed in 1852 from timber and burned down shortly after. In 1875, it was replaced by an iron structure that consisted of 13 open-deck spans totaling 819 feet carrying a single track 235 feet above the Genesee River Gorge. It was one of the nation’s oldest rail bridges and an important connector between Binghamton and Buffalo. However, the bridge was beginning to cause a bottleneck in the active rail route due to the structural stability of the bridge. Speed and weight restrictions were imposed forcing trains to slow to just 10 miles per hour. A new bridge become necessary, and in 2015, American Bridge was awarded the contract for the replacement.

The new arch bridge, built on an adjacent alignment 75 feet south of the old bridge, is a single-track crossing with a ballast-filled concrete deck. The main span is a 483-foot-long arch with three 80-foot-long girder span approaches on each end for a total length of 963 feet. The deck sits 235 feet above the Genesee River. The parallel alignment represents years of collaboration among many stakeholders to settle on a design and construction scheme that minimized impacts.

The design and construction of the new arch structure spans the entirety of the gorge while leaving no physical footprint in the Genesee River below, returning the river to its natural state for the first time in over 170 years. Care was taken to mitigate any impacts to the park trails and facilities, Civil War Era Cascade House Historic Site, and to the nesting American Bald Eagles located within sight of the bridge.

The Portageville Bridge is the first true arch built for the railroad industry since the 1940’s.  Because of the structural design criteria, there were various aspects to the project that required innovation. One innovative approach was the use of LIDAR technology to confirm crane placements, layouts, quantities, and locations of the rock excavation work for the skewback foundations in the gorge walls.

The functionality of the new bridge represents a significant upgrade as there are no longer any weight or speed restrictions. Norfolk Southern is now able to run industry-standard 286,000 lb. cars over the new structure, which is an increase from the previous 273,000 lb. limit. Trains are also able to run at 30 miles per hour now instead of needing to slow down to 10 miles per hour across the old span.

American Bridge was the general contractor for the project and was responsible for constructing the new bridge as well as demolition of the existing bridge and foundations. All structural steel erection was self-performed. Other features of the project included site work, blasting keyways for the arch in the canyon walls, micropile foundations, concrete piers and abutments, site grading and ballast, and final grading. AB mobilized on site December 2015 and the new bridge was opened to rail traffic on December 11, 2017.