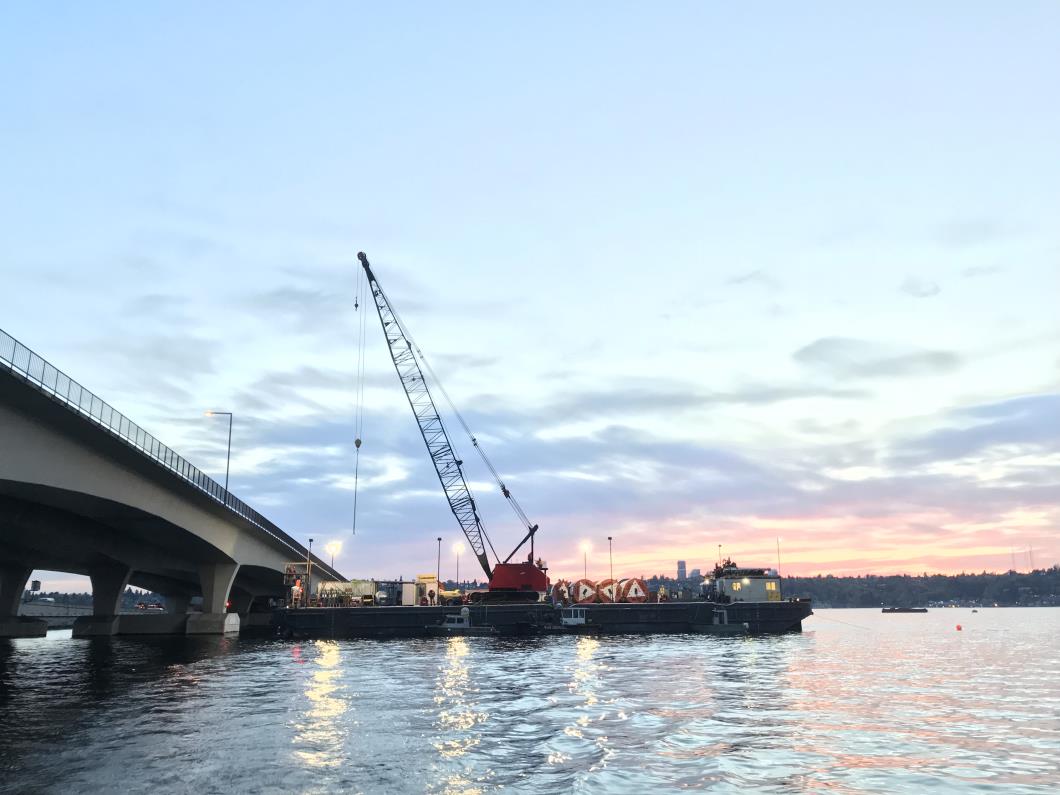 In October 2017, American Bridge Company was awarded the contract to replace 32 of the 108 steel anchor cables for the Interstate 90 floating bridges. The Lacey V. Murrow Memorial Bridge carries the eastbound lanes while the Homer M. Hadley Memorial Bridge carries westbound traffic between Seattle and Mercer Island on Lake Washington.

The anchor cables extend from the floating bridge into the water below to stabilize the structure. Each anchor cable connects to an eyebar that is attached to an anchor that is embedded in the lake floor. The opposite end of the cable connects to a secured pontoon floating on the lake. To maintain the safety of the bridge the cables must be replaced every 25 to 30 years due to pressure and stress from the current, wind, and traffic loads that cause the cable to corrode, rust, and fray. The cables range in length from 335 to 745 feet. AB replaced approximately three miles of steel cable that was approximately 2-3/8”.

After the cable installation plan had been developed and approved, it was discovered that the longitudinal cable geometry was much more complex than what was described in the contract documents. Each of the nine longitudinal cables thread over and under other transverse cables. The AB project team created a 3D model of the bridge and anchor cables based on as-built information provided by the owner. This model showed that the longitudinal cables are weaved over and under adjacent transverse cables, with very little clearance in some cases. AB then performed a Hydrographic RTK Multibeam survey of each cable to be replaced in order to verify the location, path, and depth of each cable and lakebed anchor.

From there, a plan was developed to guide the new cables along the correct path, without contacting adjacent cables or debris. AB positioned the main barge over the existing lakebed anchor, and another barge with the new cable on a steel reeler placed where the cable enters the bridge. Utilizing an underwater remotely operated vehicle (ROV), a rope was hauled to establish each correct path and then haul a winch line between the barges. Next, a new anchor cable was hauled to the main barge and placed over a sheave battery. The socketed end of the cable was then lowered to the lakebed eyebar and connected. AB then hauled the cable to the specific opening in the bridge where the end was inserted, cut, and socketed. Finally, the cable was tensioned using a hydraulic jack.

AB’s procedure not only offered significant schedule savings – allowing the project to be completed within one construction season – but also saved on overall project costs and improved the safety of operations.