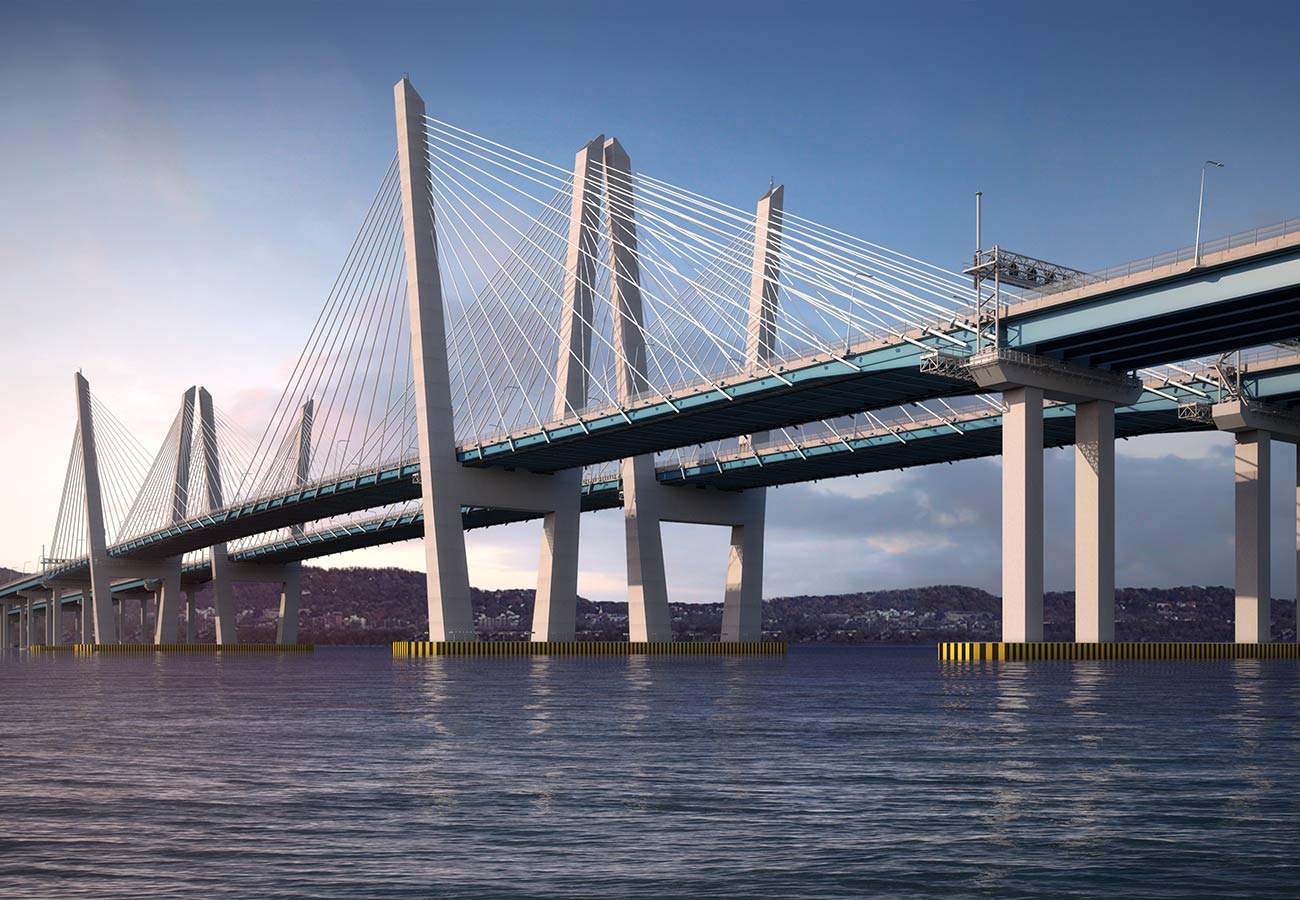 Working with a design team led by HDR, TZC engineered a steel superstructure to minimize overall weight, which in turn reduced foundation and dredging costs. The team also utilized friction pendulum bearings that reduced the stress required to be carried by the foundation system. The structure’s main span towers consist of four pairs of outward inclining cast in place concrete towers rising to 419 feet above water line. These towers were constructed using self-climbing forms.

In order to simplify the construction techniques dictated by the fluctuating water level of the Hudson River, TZC engineered a suspended pile cap forming system using precast soffit panels and a watertight form system to contain the 60’ x 360’ x 15’-6″ concrete in the pilecap. Additionally, TZC effectively managed the variable bedrock configuration and soil conditions in the Hudson River by utilizing pipe piles as the project standard, which optimized equipment and labor costs. While many of the 1,100 piles bear on the rock substrate, some reached depths of over 330 feet to develop the necessary skin friction without reaching bedrock.

Coeymans Yard
In order to effectively and economically build the bridge, pre-assembly methods for major components were utilized. This required procurement, planning, design and construction of off-site yards, and the development of custom systems for land and water movement of bridge sections weighing up to 1,100 tons. TZC set up Coeymans Yard to fabricate girders and pre-install utilities, including water for fire safety, compressed air for tools, fiber optic communications lines, electrical lines for bridge lighting and components, and security and communications lines. The largest individual girders, 120 feet long and weighing almost 105 tons, were manufactured at shops in Pennsylvania, Virginia, and North Carolina, and were delivered either by truck or barge to the Coeymans site. There, girders were bolted together into assemblies consisting of two or three-girder lines up to 410 feet long. After fabrication, girders were loaded onto barges at the Port of Coeymans for a 20-hour trip down the river to the bridge site.

A Brand New Bridge
The Governor Mario M. Cuomo Bridge has already provided substantial improvements to the economy. With over 640 New York business subcontracts, the Project has created thousands of jobs on both the Hudson and off-site facilities. TZC is currently hard at work, delivering an innovative transportation system that will continue to improve the New York area.