Forth Replacement Crossing (The Queensferry Crossing) 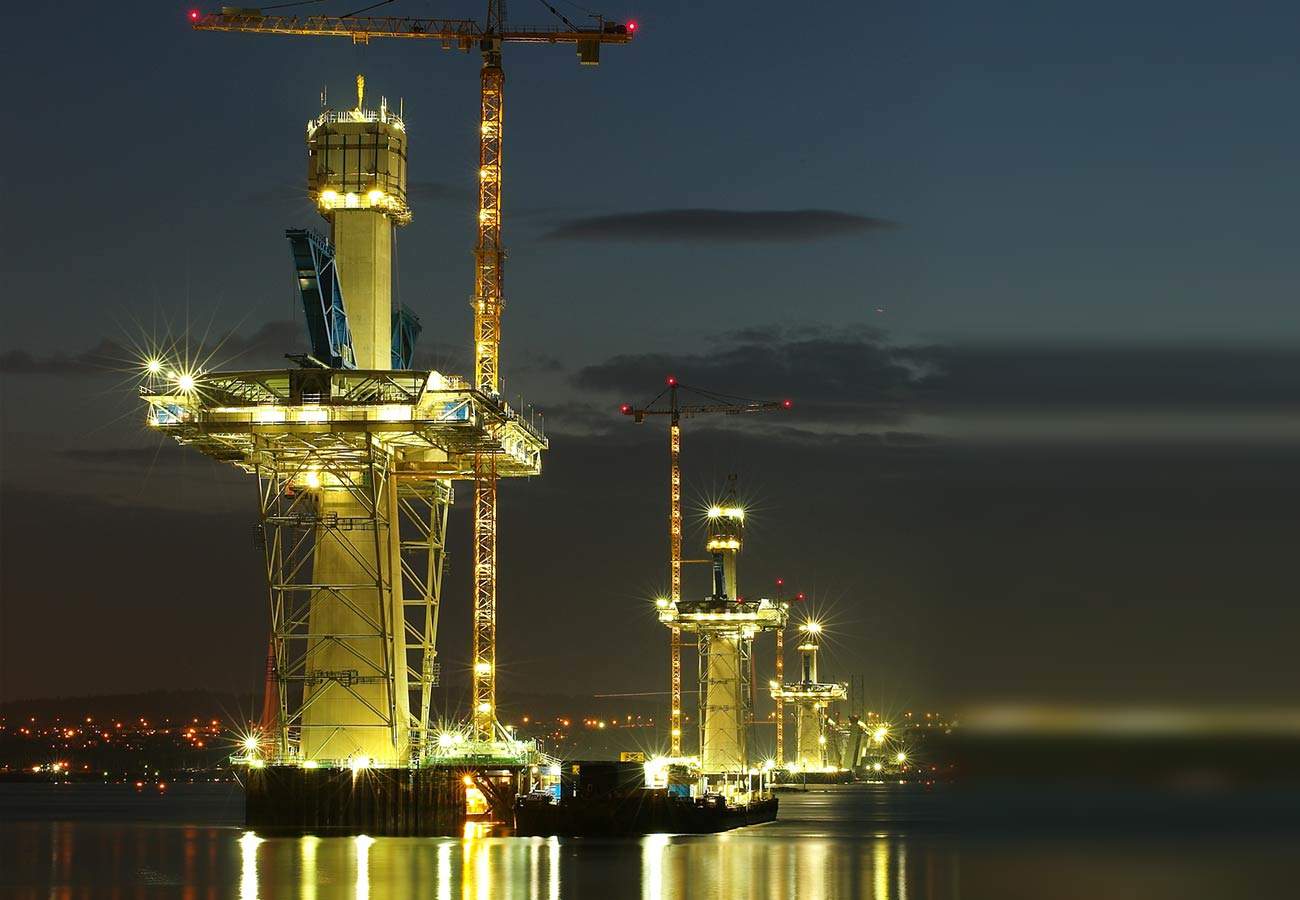 This project replaced the main traffic carrying elements of the Forth Road Suspension Bridge carrying the A-90 over the Firth of Forth near Edinburgh, Scotland, constructed in 1960. The project deviates from the existing A-90 right of way south of the Firth and re-joins at the north end, for a total right of way improvement of 9.3km, of which about 6km is total replacement. Approximately 2.6km represents a major bridge crossing of two ocean shipping and military navigation channels. Construction began in 2012 and was completed in 2017. The design-build contractor was Forth Crossing Bridge Constructors, a joint venture of Hochtief Construction AG (28% ownership), American Bridge International (28%), Dragados SA (28%) and Morrison Construction (16%).

The bridge structure has an overall length of 2,638m, including a cable-supported structure of 2,090m. The two main navigation spans are 650m each. The bridge has 14 spans, three concrete towers in the center of the transverse cross section up to 210m in height, two planes of stay cables that anchor in the center of the structure and a composite steel tub/concrete deck superstructure. The cable-stayed bridge superstructure was erected mainly by deck mounted gantries.

The twin box 75m North Approach Viaduct was preassembled on land along with 158m of single box cable-stayed bridge units, and launched as a single 233m long unit.

The cable-stayed bridge includes three concrete towers that range in height from 202m to 210m. The central tower is fixed to the steel deck superstructure by post tensioning, and the bridge deck floats around the north and south towers, protected by lateral bearings. The towers were constructed using self-climbing formwork. The main bridge superstructure consists of composite steel tub girders fabricated into segments ranging in length from 6 to 20m. They were fabricated at a specialty fabrication shop, shipped to the site, unloaded, cast with the composite deck, re-loaded, and floated to the erection point.

The road networks and onshore works feature both greenfield divided highway approaches and complex sequenced tie-ins to the existing networks. On the South side, a new bridge was constructed to carry to Route B800 over the M90 mainline, and a new South Queensferry elevated roundabout junction was constructed. Extensive protection and redundancy work was carried out on a 1m diameter BP Oil pipeline, which had three crossings of the new ROW aggregating 331m. On the North side, the new M90 tie-in required the sequenced reconstruction of the Ferrytoll interchange underneath the new and existing alignments, the construction of a new mainline elevated viaduct over Ferrytoll Road, relocation of the existing B981 on new embankment for a total of 1,000m, and reconstruction of numerous local streets. Utility works included the construction of 500m of 1.5m and 300m of 1.2m diameter combined sewer diversion and 1.1km of 355mm HPPE water pipe diversion. Total earthwork quantities for upland work was 1,000,000 M³.